My twin sister, Cindy Daniel just called me laughing her head off about the time that I lived in San Clemente, California and planned a trip to Disneyland with her and her daughters.  While it sounds fairly funny twenty years later, the elements of that day at the time were a disaster!  My “partner in crime” saucy sidekick twin sister can probably tell this tale with a far better comedy spin than I can but, here goes. 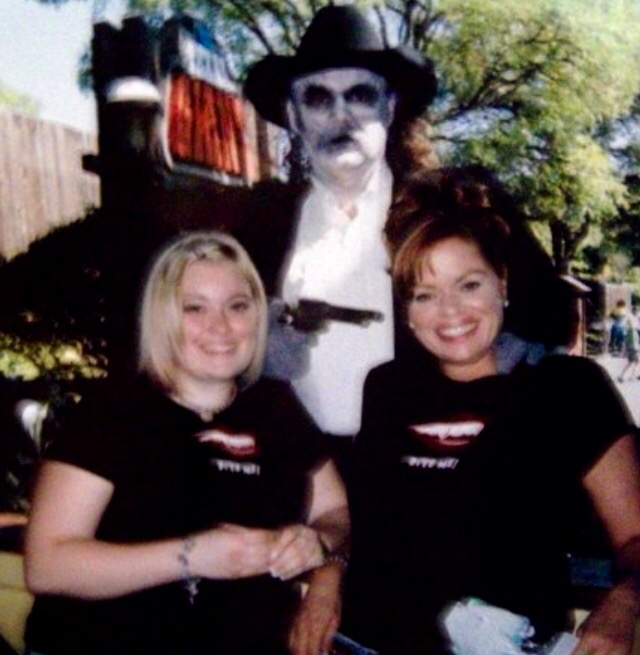 While most of you are aware my twin sister is the eternal “Good Time Charlie,” when it comes to a carnival, fun park or fair- ya all can count me in!  There are several “secret phrases” between my sister and I that are used during a crisis with one of them being to “dummy up!”  This phrase means you didn’t see it, or hear it either.  At the time of the incident in question, you effectively “dummied up.” 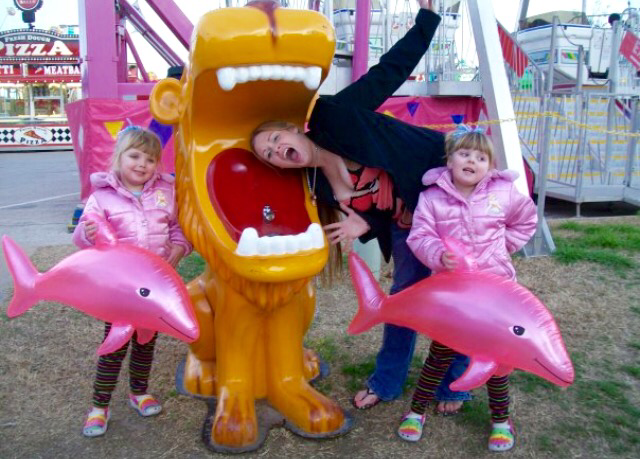 At the time of the “Disneyland Disaster” Cindy was living with me and my husband along with her daughters, Leigh Ann and Stephanie for a month long holiday.  I was married to Robert Hafele who had a bit of a short fuse and everyone knew it! If you are reading this Robert, you now know that not only Cindy but I as well knew at the time the car had been hit but, were Hellbent on having a good time and knew if we told you that the girls would be dissapointed and you wouldn’t have let us go on to a day of planned fun and festivities.  You also know that when I promise the kids something- I follow through! 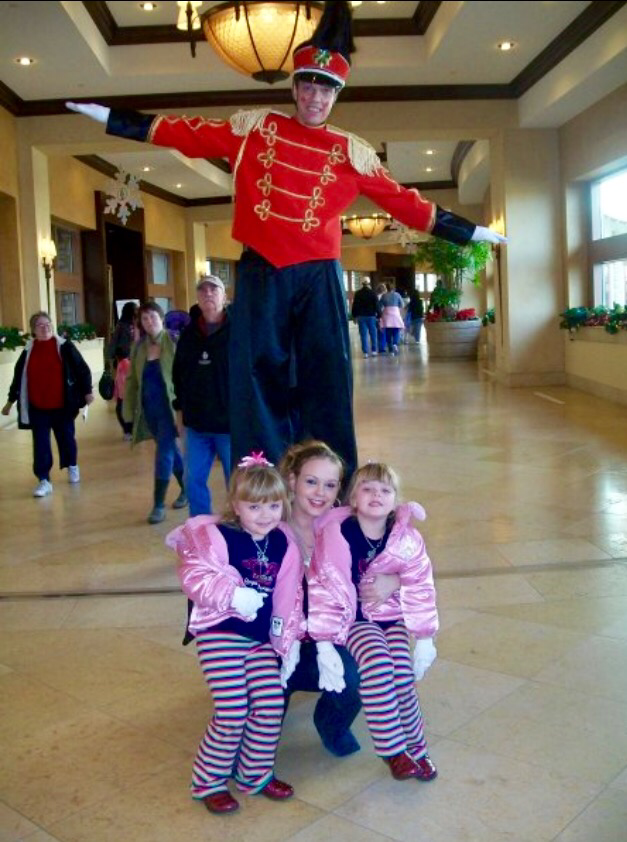 Stephaney with the Little Pawners at a Christmas Fundraiser

I had loaded up my twin and the girls into my Beretta and drive to the Bank of America to grab a few bucks and was pulling out of the lot when a truck full of farm workers hit the passenger side of my car.  Asking for insurance and a license, they claimed “no English” and drove off.  Cindy and I had a moment to consider “reporting to my husband” or, to “dummy up” and head on to Disneyland, we decided to have fun instead of getting yelled at.  Ironically, one week prior to picking up Cindy and the girls, the same side of my car had been hit while parked in my driveway and my husband was furious that I had done something which I hadn’t, I swear to it that car got hit while parked the first time it was damaged.  The second time? Yes, I was driving it and they drove off- what was I supposed to do? Call the police and ruin our scheduled fun? The show goes on around here and since the car was driveable, I drove it right to Disneyland and ran into my husband in the parking lot who had taken the day off to meet us? without telling anyone! I looked at Cindy and said plainly- “dummy up Pal!”  My husband walked up to the car screaming and waving his hands asking “what the Hell? I just paid to have this car fixed!”  With his usual “Wendy what have you done look,” I said I don’t know what you’re talking about and why are you here? (To spoil the fun for everyone apparently.) Going over to the passenger side,  my sister tried desperately not to laugh which she always does when we are caught in the act, and explained that she didn’t notice because she was talking to me.  Now, everyone that knows is also knows that we are going to “dummy up together” if necessary to overcome a hotheaded husband- we’ve both had two of them and if anyone can “spoil the fun” it’s our ex husbands to such an extent that I believe if they were aware we were looking forward to something that they would do anything to screw it up! There have been a few rare moments like the “Disneyland Disaster” that years later, still remain fresh in our minds. But, we love having fun with the kids and if we had a few incidents go the overall execution- we took them in stride. 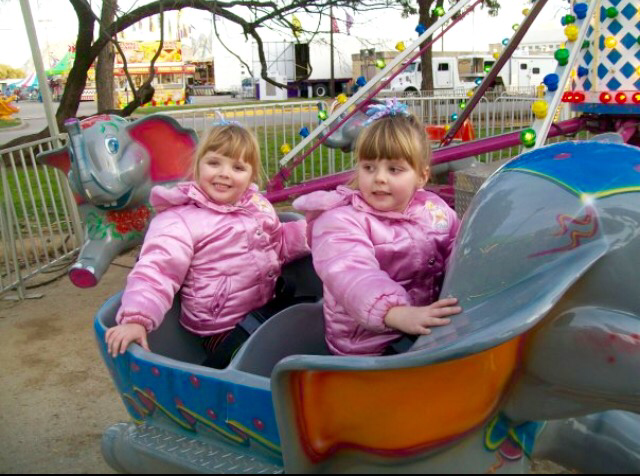 All of our children have fond memories of the escapades we went through to get there and have a good time much like Lucy and Ethel, we have to “wing it on a few of them!”  The “Santa’s Village Incident” followed up Disneyland the following week when my husband ripped his shorts and Cindy couldn’t stop laughing about it.  My solution was to buy a really long shirt and go back to having a good time.  The thing is, it’s impossible to have any fun when you’ve got a hothead husband, the solution? Get a divorce, life is too short to have a stick in the mud and when you’ve got a saucy sidekick for your twin sister who is far more fun than your ex husband, you came out ahead my friend! 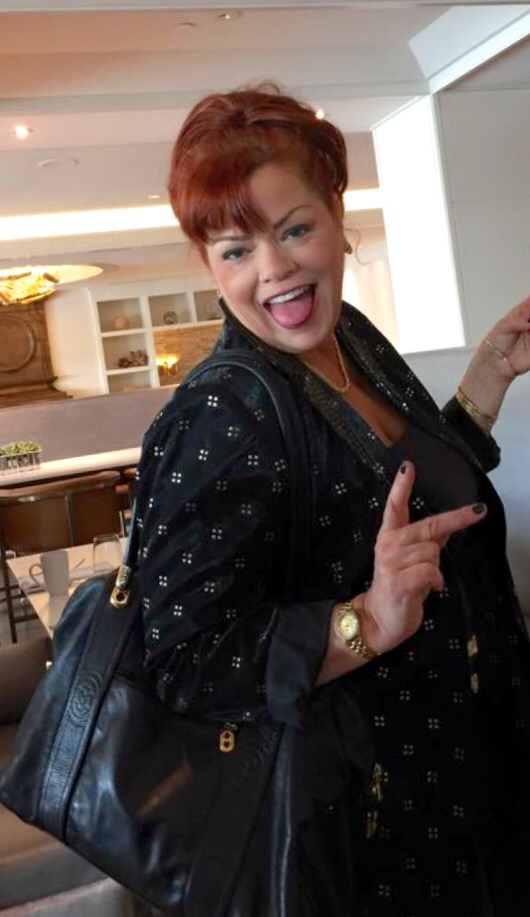 Wendy Wortham “Getting the show on the road!”

Cindy and I are both now happily married to two wonderful guys who don’t share our love of fun parks and adventure.  That’s okay because they enjoy relaxing in an empty house after we’ve loaded up the suv’s and headed to our next event, they know we have a lot of fun with each other and the kids and never attempt to interfere and spoil the fun for everyone which is wonderful when you consider the hurdles we’ve traveled the past 30 years trying to “get the party started!” Life is too short honey and I think the carnival is coming to town…